The prolific musician has started a nonprofit and taken a leadership role at Berklee College of Music. On a new album, “Diatom Ribbons,” she continues to make her point clear. 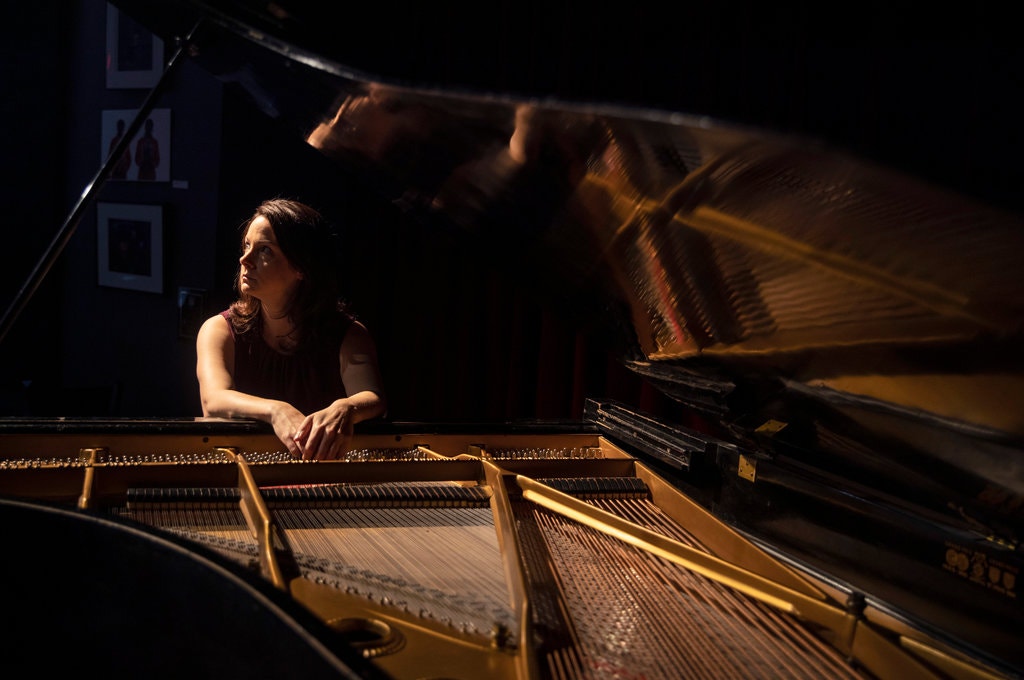 OSSINING, N.Y. — Since moving to New York in the early 2000s, the pianist Kris Davis has released close to an album a year under her own name, rarely with the same group twice, while also becoming one of the most trusted side musicians in avant-garde jazz. Her signature style, based in miniature gestures, has a peculiar appeal: Rarely does such serrated, asymmetrical music — often diced up into odd time signatures, or improvised freely — feel this fun to listen to.
Last year she tied for the top spot in the “Rising Star Artist” category in DownBeat magazine’s critics poll, a good gauge of who’s next in line. And she has stepped up her work as an impresario and educator: She recently formed a nonprofit organization, which now houses her record label, Pyroclastic Records, and this fall she took on a leadership position at Berklee College of Music’s new Institute of Jazz and Gender Justice.
In all of these roles, Ms. Davis, 39, is fighting for fringe music, guiding it toward a more engaged — and maybe even accessible — future. But her best arguments on its behalf have always come directly through the music. On Friday, Pyroclastic will release “Diatom Ribbons,” Ms. Davis’s latest album and the one most likely to catch on with a broad jazz audience.
“It was a little bit of trying to throw a wrench in things and see what happened,” Ms. Davis said last month over lunch near her home in northern Westchester, explaining how she assembled the unusual band featured on the album. “I never like to bring in a piece and say, ‘This is the finished product.’ There’s more to be done, in terms of the composition and the collaboration, that for me brings the piece to life.”
The record is both a refinement of Ms. Davis’s strengths as composer and bandleader, and an expansion on them. Its motley group of musicians — often from opposite ends of the jazz world, some of whom hadn’t even heard of each other before the session — include two saxophonists, two guitarists, a bassist, a vibraphonist, a turntablist, a drummer and Esperanza Spalding on occasional guest vocals. They play in various configurations across the 10 tracks, almost all Davis originals.
And “Diatom Ribbons” puts her rhythmic, pattern-based style of avant-garde playing into a direct conversation with funk grooves, played with prismatic nuance by the drummer Terri Lyne Carrington — a marriage that, in retrospect, seems like it was destined to occur.
Uniting musicians from such different artistic backgrounds, never establishing a standard ensemble size, Ms. Davis forced the group members to listen to one another harder, and to place their traditional instrumental roles into question. 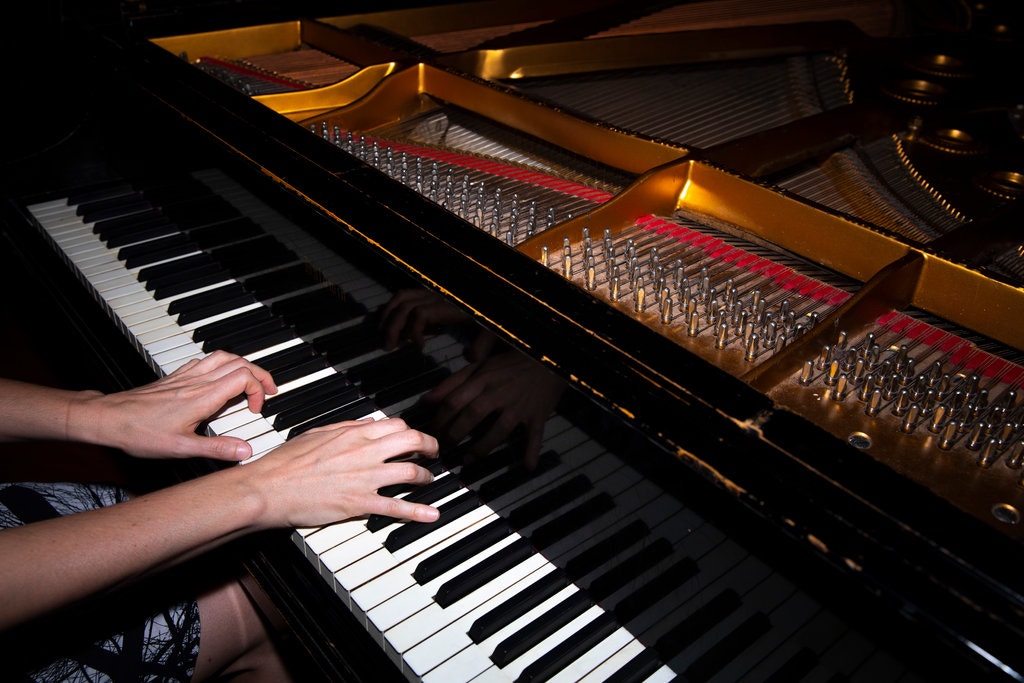 “I never like to bring in a piece and say, ‘This is the finished product,’” Ms. Davis said. photo by Calla Kessler/The New York Times

For Ms. Davis, it was the interdependent nature of improvised music that first drew her to jazz. In junior high school, inspired by a passionate music teacher, Kevin Willms, she and her friends gathered at each other’s houses on weekends in Calgary, Alberta, to play and listen to records, as if they were starting a rock band.
“When I joined the jazz band in junior high school, it just opened another world,” she said. “Oh, we can make music together? Oh, we can actually improvise?”
She went on to study music at the University of Toronto, playing almost every night on the city’s humming jazz scene. Even at relatively buttoned-up gigs, she found ways to push boundaries without losing people’s attention.
“I would take it way out,” she said, remembering her weekly solo-piano engagements at the Toronto Marriott. “It didn’t matter. Everybody was just like, ‘Oh, she’s into it.’ It’s meaningful, it has intent, so people would always respond.”
After graduating, Ms. Davis moved to New York City in 2001. She found a community there of other recent music-school grads, and a mentor in the saxophonist Tony Malaby. When he invited her to “bring some structures” — that is, small musical phrases or devices — into a rehearsal that the band could mess around with, it unlocked a new way of understanding composition: as a form “of influencing improvisation and directing it in a specific way,” she said, but not controlling it.
“I was immediately struck by how she would interact with ideas, getting them really fast and then turning them into her own expression,” Mr. Malaby, who appears on the new album, said in an interview. “Then the thing that’s amazing about Kris is, she was able to put that down on paper in a way that never felt caged or framed. She could catch the essence and the vibe and the purity of improvisation, and then be able to catalog it as a place to start from.”
“Diatom Ribbons” draws its name from the tiny, single-cell algae known as diatoms that live in waterways around the world and produce half of our breathable oxygen. Looked at through a microscope, their individual structures are beautifully patterned; seen from far-off, in satellite images of oceans, their sprawling formations are just as striking.

It’s clear why Ms. Davis would be drawn to these little life-forms. Much of the music on “Diatom Ribbons” is built on phrases of just a few notes, which she then moves around between keys or positions on the piano. Often, miniature hammering patterns are rejiggered and replanted in various places across a measure or a track, becoming the foundation for an expansive, ensemble-driven piece. While Ms. Davis focuses a lot of energy on crafting short, isolated bits, she vests her notes with a particular sensitivity and awareness. There is always a reassuring continuity within this ostensibly hectic music: a sense of rolling forward and building out, as if everything were connected.
The secret to all this, really, is great rhythm. Perhaps the most essential quality to Ms. Davis’s success, her rhythmic sensitivity comes largely from the influence of Cecil Taylor, she said. (On various tracks on the new album, the turntablist Val Jeanty cuts up excerpts from interviews with Taylor and the French modernist composer Olivier Messiaen, an equally strong source of inspiration for Ms. Davis.)
“He’s playing free, but there’s rhythm in everything that he’s playing,” Ms. Davis said of Taylor’s music. “There can be rhythm, even when it is abstract or visceral. It still can be rhythmic.”
Ms. Carrington sensed this immediately in Ms. Davis during their earliest performances together: first when she invited the pianist to join her band for a gig in Taipei, then when Ms. Davis returned the favor, bringing Ms. Carrington and Ms. Jeanty together in an unorthodox piano-drums-turntables trio, for a wholly improvised set at the Stone.
“The way she was playing, it just made the whole band come together,” Ms. Carrington said. “Even if we were not playing something in the same rhythm at the same time, it would still work together.”
Struck by Ms. Davis’s ability to unite different musical ideas, and therefore a wide range of musicians, Ms. Carrington hired her this year to join the Berklee institute as a full-time instructor and assistant director.
“It’s not traditionally a school that focuses on ‘improvised music’ and more contemporary playing and writing,” Ms. Davis said. “So that’s my focus: to create a community there for the students, and also for the faculty.”