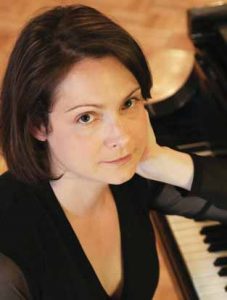 THE WORD “OPENNESS” CROPS UP OFTEN IN A CONVERSATION WITH PIANIST KRIS DAVIS, WHO USES THE TERM WHILE REFERRING TO MUSIC, AND TO LIFE IN GENERAL. REFLECTING ON HER 2016 CD/DVD SET DUOPOLY (PYROCLASTIC) WHICH FEATURES HER IN DUETS WITH EIGHT DIFFERENT PARTNERSSHE SAID: “THE APPEAL OF DUO PLAYING IS THE
OPENNESS OF IT, WHERE THE MUSIC FEELS LIKE IT CAN GO ANYWHERE. THEN THERE IS THE CONVERSATIONAL INTIMACY OF IT, LIKE TWO PEOPLE TALKING, WHERE THERES THIS SPACE FOR GIVE-AND-TAKE.”

For her interview with DownBeat, the Calgary native decided to meet us at a café in the Park Slope neighborhood of her former home borough of Brooklyn, just before giving a private lesson to a teenage student. Davis, 37, moved not long ago to the Hudson Valley community of Ossining, north of New York City, with her husband, guitarist Nate Radley, and their 4-year-old son, Benji.

“It was becoming impossible to sustain a life as a parent and a musician in New York,” she explained. “Our lives are so much easier in Ossining day-to-day, and there’s room for Benji to play outside. I feel lighter overall, with more mental and physical space and time to compose and experiment.”

Although her soft-spoken demeanor and appreciation for suburban gardening might belie the fact, Davis is every bit the driven, focused, prolific artist, very much a modernist. Prior to Duopoly, she released arresting albums as a leader in solo, trio, quartet, quintet and octet formats over a dozen years or so, not to mention adventurous discs with trio Paradoxical Frog (with saxophonist Ingrid Laubrock and drummer Tyshawn Sorey) and her contributions to albums by the likes of saxophonist Tony Malaby and bassist Eric Revis.

“Everybody on the record is involved with different aspects of jazz—but with the common thread of each being a creative musician and a great listener,” Davis said about the Duopoly lineup. Although some interactions were trickier than she expected—it took 12 takes to find happy common ground with Bryon on “Prelude To A Kiss”—others clicked right away. “It was amazing how easy it was to play duo with Bill Frisell,” she said. “We did two takes of a tune, then three improvs—all in a half-hour.”

The session with Taborn went so well that the two embarked on a rare duo-piano tour. “With duo piano, there’s the basic challenge of staying out of each other’s way,” she said, laughing. “But we never discussed the music that much, just working it out on the gig. We talked instead about everything from microtonal death-metal to Geri Allen.” Davis is prepping a live album from the dozen shows with Taborn, for release on her Pyroclastic Records imprint.

Reflecting on Davis’ qualities, Taborn echoed what many DownBeat critics were surely thinking when they voted her the winner of the category Rising Star–Piano. “Kris has the mind of a composer but an improviser’s soul,” Taborn said. “Her music has so much order and design, even as her temperament is open to surprise and challenge. Also, her playing is much more responsive to context than it is to stylistic tendencies. Kris is really a fearless improviser—and the truth is that there aren’t as many of those these days as one might think.”

Davis recently composed a book of classical- style pieces for solo piano. Pianist Rory Cowal has recorded these for an album to be released by New World Records next year, and Davis will be publishing the pieces as sheet music via Pyroclastic. Like the ambitious ventures that resulted in her octet album Save Your Breath (Clean Feed) and the audiovisual release of Duopoly, this new project for piano was supported by the Shifting Foundation, whose David Breskin has become an “indispensable” catalyst for Davis as a producer.

Of late, Davis has been playing music from John Zorn’s book of bagatelles, with a quartet that also includes Sorey, guitarist Mary Halvorson and bassist Drew Gress. And, inspired by the example of Dave Douglas’s Greenleaf Music, Davis aims to offer a subscription series via Pyroclastic, releasing something monthly—whether it’s a studio album, live recording, video, scores or an interview. “I’m looking forward to opening up the format for releasing creative work. Openness creates room for more possibilities.”