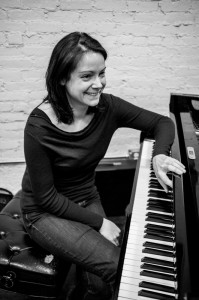 Pianist-composer Kris Davis was named 2017 Rising Star Pianist/2018 Rising Star Artist in Downbeat magazine and dubbed one of the music’s top up-and-comers in a 2012 New York Times article titled “New Pilots at the Keyboard,” with the newspaper saying: “One method for deciding where to hear jazz on a given night has been to track down the pianist Kris Davis.” To date, Davis has released twelve recordings as leader. Her 2016 release, Duopoly, made The New York Times, Pop Matters, NPR, LA Times, and Jazz Times best albums of 2016. Davis works as a collaborator and side person with artists such as John Zorn, Terri Lyne Carrington, Craig Taborn, Tyshawn Sorey, Eric Revis, Michael Formanek, Tony Malaby, Ingrid Laubrock, Julian Lage, Mary Halvorson and Tom Rainey. Davis received a Doris Duke Impact award in 2015 and multiple commissions to compose new works from The Shifting Foundation, The Jazz Gallery/Jerome Foundation and the Canada Council for the Arts.  She is the Associate Program Director of Creative Development for the Insitute Jazz and Gender Justice at Berklee College of Music. 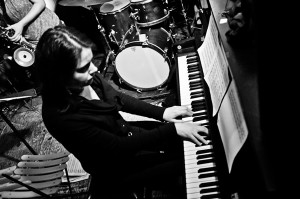 “Their interplay is both surefooted and focused, aiming at a voluminous overall whose parts are congruously attached. There’s a lot to digest here, but this is definitely worthy of your time and attention.”

“Even when playing at full stretch, pianists Kris Davis and Craig Taborn deliver the control and sense of purpose of a single intelligence.”

“[Octopus is] a vibrant study in morphing color and contingent texture, and in every sense a brilliant meeting.”